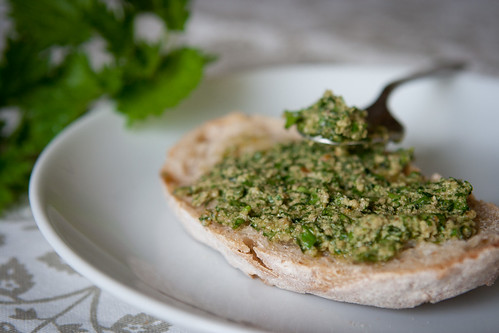 It finally seems like winter has left the building and spring is making itself known in the trees, in the hedgerows and underfoot. The grass is looking greener, buds are starting to appear on the elder shrubs and one of the first of the season’s finest forage-ables are coming into its own: the stinging nettle!

Young nettle leaves are already popping up all over my garden and now is the time to get in on their bounty: nettles are best when they’re young as older leaves tend to be woody and somewhat tough when cooked. But the young leaves, once boiled, are soft, delicate and hugely versatile. 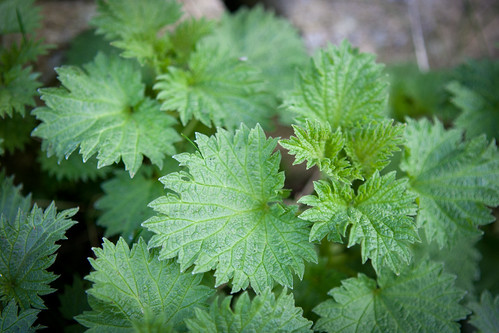 Nettle Soup is one of the more popular options. Rachel Demuth at Demuths Cookery School has been making Nettle Risotto and Nettle Fritters, Hank Shaw has been getting his pasta on with Nettle Ravioli and Strettine. My friend, Kanna, has even made Nettle Cordial.

The first thing I’ll be making with my nettles is something to go the distance: Nettle Pesto, a versatile condiment that’s great with pasta, as a soup garnish, on bread… basically anywhere you’d use conventional pesto. And the recipe is completely open to variation. My recipe is a vegan pesto, using no cheese (the toasted nuts give it plenty of richness), but you’re free to add parmesan, pecorino or any other hard cheese as you see fit. You can also play around with the nuts – I love walnuts but hazelnuts, pine nuts, cashews or a mix are also terrific with this.

You can also combine the nettles with other herbs like parsley, basil or wild garlic (more foraging!) to make a mixed green pesto.

As to picking nettles, remember, they sting so use gloves and a carrier bag. Blanching the nettles gets rid of their stinginess so until you’ve blanched them, keep those gloves handy!