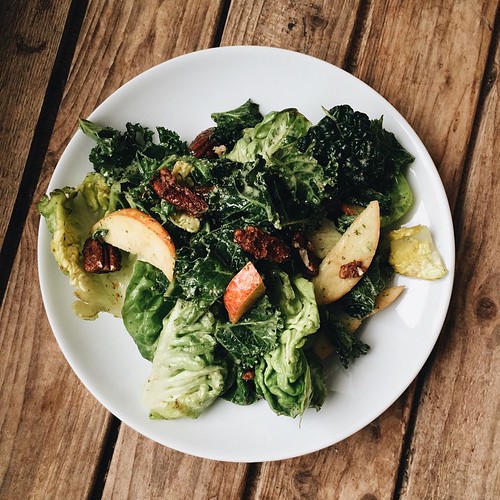 Last weekend was Imbolc, the halfway point between winter solstice and spring equinox, and an all-around good excuse to celebrate the season and have a party. The etymology of the word “Imbolc” is a little unclear, but most scholarly people agree it has something to do with ewe’s milk, thus making sheepy things a common symbol of this festival. For us food adventurers, this was all the excuse we needed to play around with sheep milk in various guises, and one of our biggest successes was this kale salad.

The recipe is a slight riff on Seamus Mullen’s Kale Salad with Apple, Toasted Pecans, and Yoghurt and Dill Dressing currently featured on Matching Food and Wine.

It’s worth pointing out that this kale salad required no “massaging”, kale chipping or other trendy kale techniques to make it spectacular. It’s all about the ingredients and the perfect combination of flavours. Sweet, sour, savoury. If Imbolc actually did have a God, Seamus Mullens might be it.

This salad isn’t a life changer per say, but it is a game changer in that it’s raised the bar for my usual big kale salad routine, which up until Imbolc had been average at best. It reminds me of something worth aiming for when cooking for other people: the element of surprise. And it also reminds me to experiment with flavors and try other people’s recipes, even if they do sound weird.

So does anyone else have a crazy weird awesome kale salad for me to try?