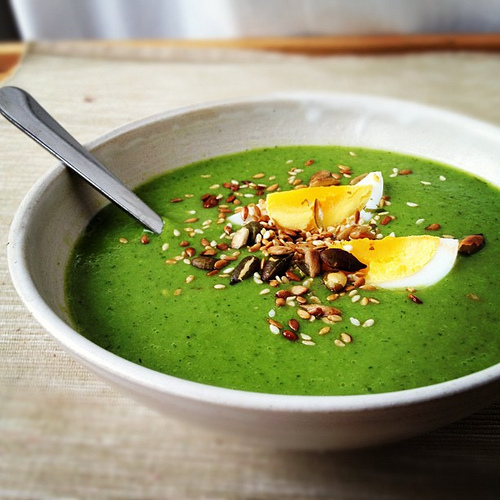 When I first moved to England, I was mystified by the presence of watercress on the shelves alongside more common salad greens like spinach, “baby leaves” and arugula (“rocket”, that is). It’s available all year round, though it’s at its best April through September.

Still, even when watercress is at its prime, I have a hard time dealing with it raw – it’s flavour is bitter, slightly peppery, which I often find overpowering when served in a salad or as a garnish. So I’ve been exploring watercress’s other uses, treating it more as an herb, and in the process have discovered some great ways to use this pungent green outside of the salad bowl.

The sweet peas and refreshing mint in this recipe balance the peppery watercress, and it’s super delicious garnished with croutons, toasted seeds, or a hard boiled egg (or all of the above!).

This soup requires a blender – I use a Froothie power blender which blitzes even the toughest of pea membranes and watercress stems into a fine puree. If you are working with a stick blender or something less powerful, you can strain out any stray solids after blend it to get a silky smooth and luxurious soup. Enjoy!

Just a heads up: this post contains affiliate links to the Froothie website – I’m a ambassador for their brand because, well, their blenders rule!