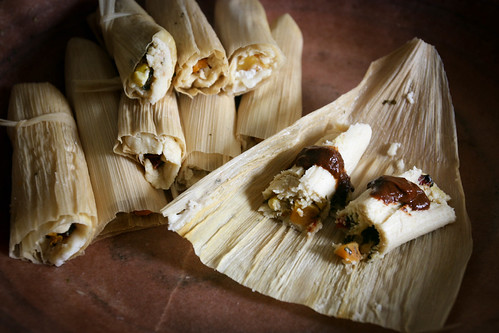 Last night I had a little Tamale Party with friends Jane, Jimmy and Steve to celebrate Jane’s and Jimmy’s Month of Anniversary. The event stemmed from a recent walk in Wales, wherein I expressed to Jane and Jimmy my desire to further my tamale practice, and they offered themselves as willing taste testers and sous chefs. 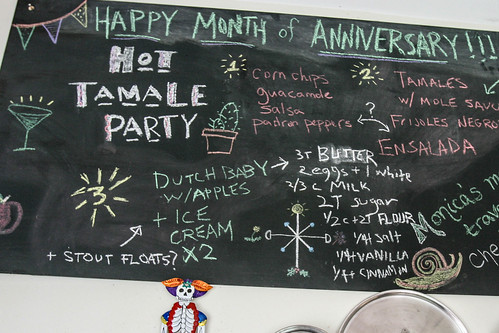 There was a pretty steep learning curve here, and I admit our tamale rolling efforts weren’t exquisite (that may have been the numerous margaritas, white russians, negronis and long island iced teas talking). So this morning I woke up and had another sober attempt at rolling tamales, and things went pretty well, so I thought I’d share my notes and photos from the process in case it’s helpful to anyone else. 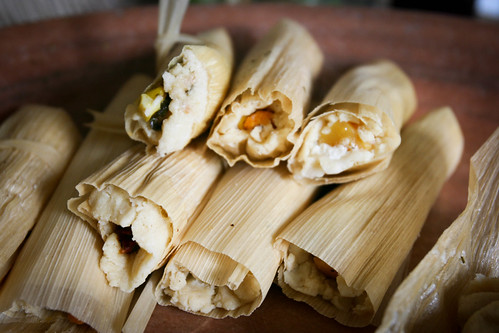 The recipe I used as a base is Rachel Demuth’s Tamales Rellenos de Calabacin from Demuths Cookery School which uses roast butternut squash and feta for the filling. I’ve written about this recipe before, but this time I made a few tweaks that I think improved matters considerably. I added roasted red pepper and sweetcorn to mine – the corn really made it for me. Instead of feta, I did some tamales with queso fresco, and others with goats cheese. The queso fresco offered a nice melty chewy cheesy hit, but I think I preferred the salty creaminess of the goats cheese tamales.

Big learning points were: make sure that the batter is pretty soft – you should be able to smear it across the husk with a spoon; also, spread the batter in one corner of the husk – this makes rolling the tamale a no-brainer (this video was very helpful in this regard).

My tamale technique still needs practice and I’d love to experiment with other fillings, so hopefully my amazing sous chefs will return for more tamale rolling and taste testing, and requisite margarita drinking which, let’s face it, makes even the most poorly rolled tamale taste like a dream!

I recommend serving these with mole poblano sauce, but you could also do any kind of salsa, red or green, or a creamy verde sauce.