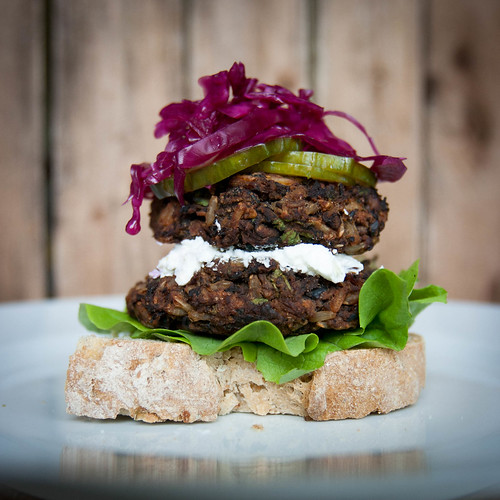 I have a love-hate relationship with veggie burgers (see this post from 2008: Wanted: A Veggie Burger That Isn’t a Mush Burger). The best veggie burger I’ve ever had was the beetroot burger from Mildred’s in London. I’ve since tried many veggie burger recipes, but most fail on various merits: too mushy, no texture, boring flavour, crumbly, and most commonly, made with so many breadcrumbs as to totally negate the need or desire for a bun.

I’ve even gone so far as creating a website entirely devoted to my search for the Ultimate Veggie Burger. But after so many experiments I was starting to think that veggie burgers were a total misnomer and that it was impossible to recreate the visceral joy of eating a tasty burger (with your hands, please, none of this British knife-and-fork stuff) without going back to the basic meaty principles.

It’s been a while since I’ve ventured back into veggie burger territory but I was inspired by my friend, CrossFit buddy, and fellow veggie burger enthusiast Jane to give them another go. Anna Jones’ recipe for The Really Hungry Burger caught both of our eyes. It helps that the picture of the burger looks awesome, but the ingredients sound really interesting too: mushrooms, dates, tahini… this burger was speaking my language. And Anna Jones’ own notes address some of my core concerns about veggie burgers:

Please be assured that this is not the breaded sweetcorn and mushroom mush excuse that usually shows up between two white buns. This is a hearty health-packed wonder that makes no apology to anyone…I’ve played around with a lot of recipes before settling on this one, some full of bright herb freshness and grated veg, some packed with protein-rich tofu, and all were good, but what I look for in a burger is a deep moreish flavour, savoury and complex, so this is the one. 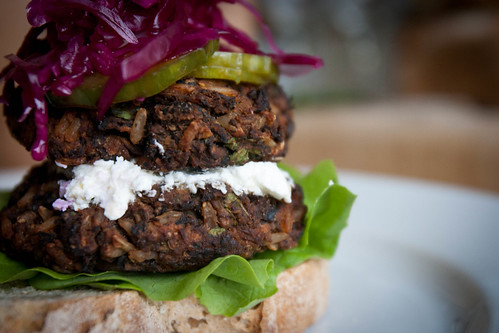 Jane and I made these burgers two ways: one with cannellini beans, the other with black beans. Both were awesome. The burgers hold their shape exceptionally well and they have great texture from the brown rice. The flavour really IS savoury and complex – I probably wouldn’t guess dates and tahini from the burger alone, but they combine perfectly with the rest of the ingredients to make a really tasty burger that’s totally worthy of being called “The Really Hungry Burger”.

As to toppings, Jane and I both liked Anna’s suggestion to serve the burgers with avocado and a quick cucumber pickle. We also felt that the burger benefited from a good dose of cheesy goodness. And of course, everything is better with giardiniera.

So maybe my quest for the Ultimate Veggie Burger is not fruitless after all. I will definitely be coming back to this recipe again, which means I can turn my attention to solving other problems, like what is the ultimate drink pairing to go with a veggie burger? To this end I had some help from Sir Neil of the France wine experience, whose top pick was a white Rhone. I got hold of a Jean-Luc Colombo La Redonne, which I swear I didn’t pick just for the name. This was way more fruity than the white wines I usually go for (NZ Sauvingon Blanc is my usual default, which probably says a lot about my knowledge of wine!), but I really enjoyed something new and I thought the wine’s peachiness stood up well to the hearty burger, and the total flavour explosion that came from all the wild toppings!

Finally, it should be noted that Jane fed the leftovers to a couple of meat-loving dudes who thought the veggie burgers were outstanding. The recipe features in Anna’s new book A Modern Way To Eat, probably worth picking up if you’re looking for satisfying vegetarian recipes designed to please ALL lovers of good food, veggies and omnivores alike.

Get the recipe: The Really Hungry Burger [annajones.co.uk]