A few years ago I was a big fan of juicing. I wrote about my first 7-Day “Juice Feast” in November 2013, wherein I followed Jason Vale’s plan outlined in his book “7lbs in 7 Days” (please forgive the title). I felt so energised on this Juice Feast that I repeated it several times over subsequent years, whenever I felt like I need a reset. The juice feast provided an amazing boost and a break from bad habits. It also created loads of space and time (time saved not cooking and cleaning) to be super focused and productive. 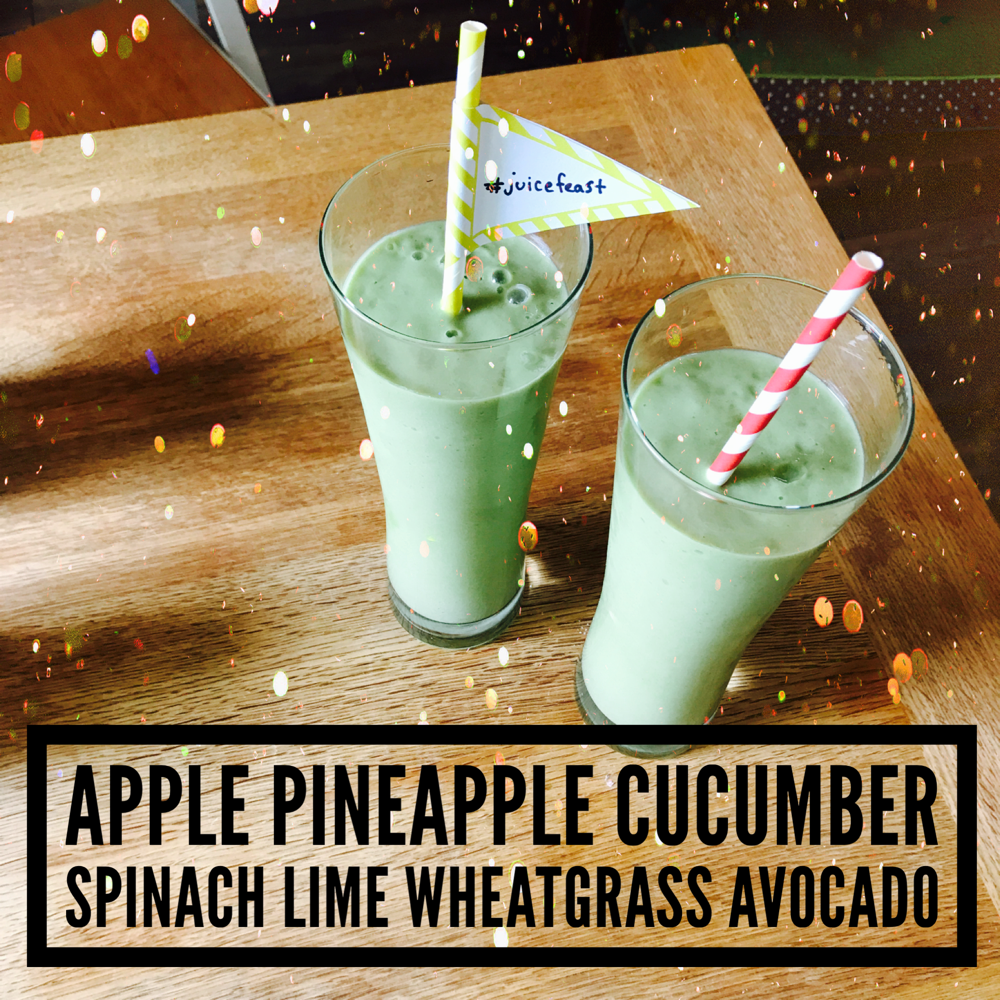 Somehow in recent years my juicing ways escaped me. This likely has something to do with a rejection of the “clean eating” / “detox” mentality that has become so popular. Truth be told, in November 2013 I weighed less than 100lb and should have been seeking to GAIN not lose seven pounds!  At that point my self-induced insistence that I eat only perfect foods and exercise at least 2 hours per day led me to become frighteningly underweight.  At that time, my motivation to “juice feast” was probably founded on some fundamentally flawed and potentially damaging thinking about food and health.

The Guardian published a very good read last Friday on why we fell for clean eating which sums up my predicament. I can’t believe I was such a sucker! But I should be grateful. Somehow along the way I snapped out of it. My approach to food was ruining my social life and my relationships (can you imagine dating someone who can’t, for example, enjoy going out for a meal or to dinner at a friend’s house because that would mean being “out of control” of the food that was going into her body?). I started to embrace satiety. I still kept to my healthy whole food standards, but rather than maintaining a perpetual underlying level of hunger, I started eating until I was full. I started accepting invitations to go out for pizza. I drank numerous alcoholic beverages at parties. I found new types of exercise that weren’t about burning calories but were more about having fun and creating skills for life – CrossFit, hillwalking, cycling. Eventually I found myself at a fairly healthy weight and seemed to find a workable balance between eating real food, keeping fit, and enjoying some indulgences with friends from time to time. 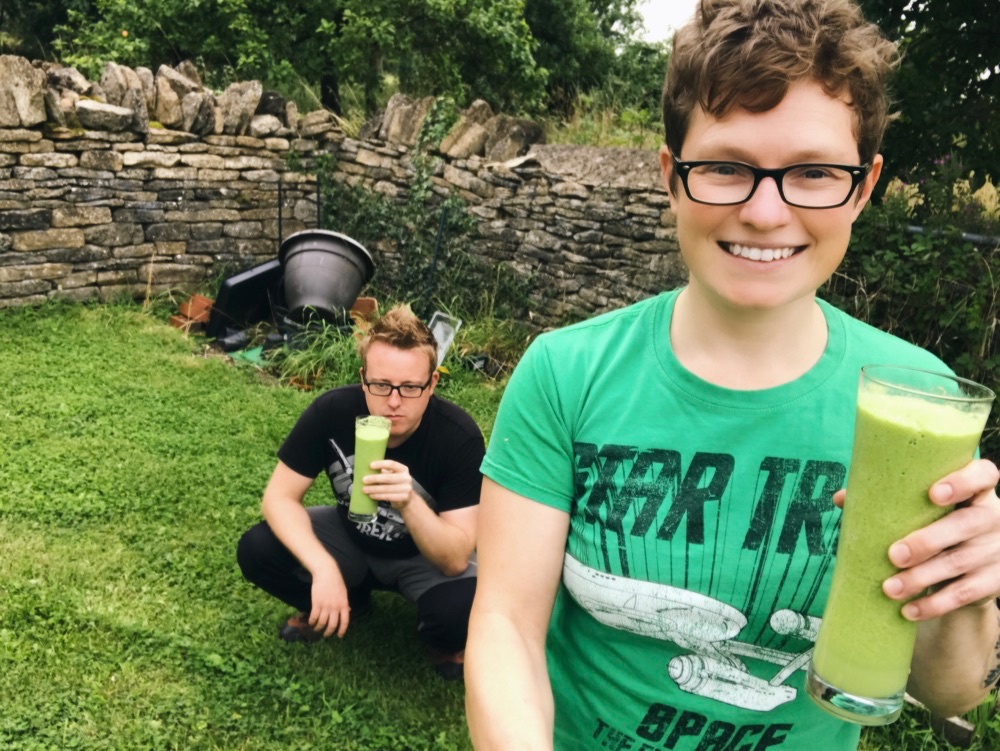 Believe it or not, Andrew is enjoying it!

Then this amazing thing happened. I met Andrew who is awesome! I don’t think I’ve ever met another person who matches my energy for food, cooking, and outdoor adventures. And also for celebrations! We are never short of things to celebrate. I feel like we’ve spent the last year and a half celebrating us, which is pretty cool. But our celebrations have started to become almost habits, offering diminishing returns and, annoyingly, a bit of extra weight on our bodies where we’d prefer not to have it. This has also created a lot of stress. As someone who has struggled with her weight in both directions for many years, it was a blow to discover that I’d pretty much gained back all of the weight I had lost when I started on this healthy living malarkey so long ago. And I’ve felt powerless to change. Andrew, who has also experienced a health journey, had also become frustrated with his own physical well-being. The situation was in danger of leading to a lot of resentment and even more ill health if we didn’t do anything about it – and fast!

During one stressful conversation two weeks ago I mentioned to Andrew that I was thinking about doing a juice feast. I really didn’t expect Andrew – lover of bread and ever concerned that he’s eating enough protein – would be into it for himself. So he surprised me when he suggested we do it together, and even ordered the book (I’d donated my copy to charity long ago). The motivation for us both was less about the weight loss and mostly about the mental reset. We’d often make plans to kick start healthy awesome habits but often they’d get interrupted by anything from sunny weekends to stressful conversations. The juice feast felt like a pretty solid way to really draw a line under the sand (“across this line, you do not!”) and since I’ve done it many times before, I felt prepared and confident I could do it. 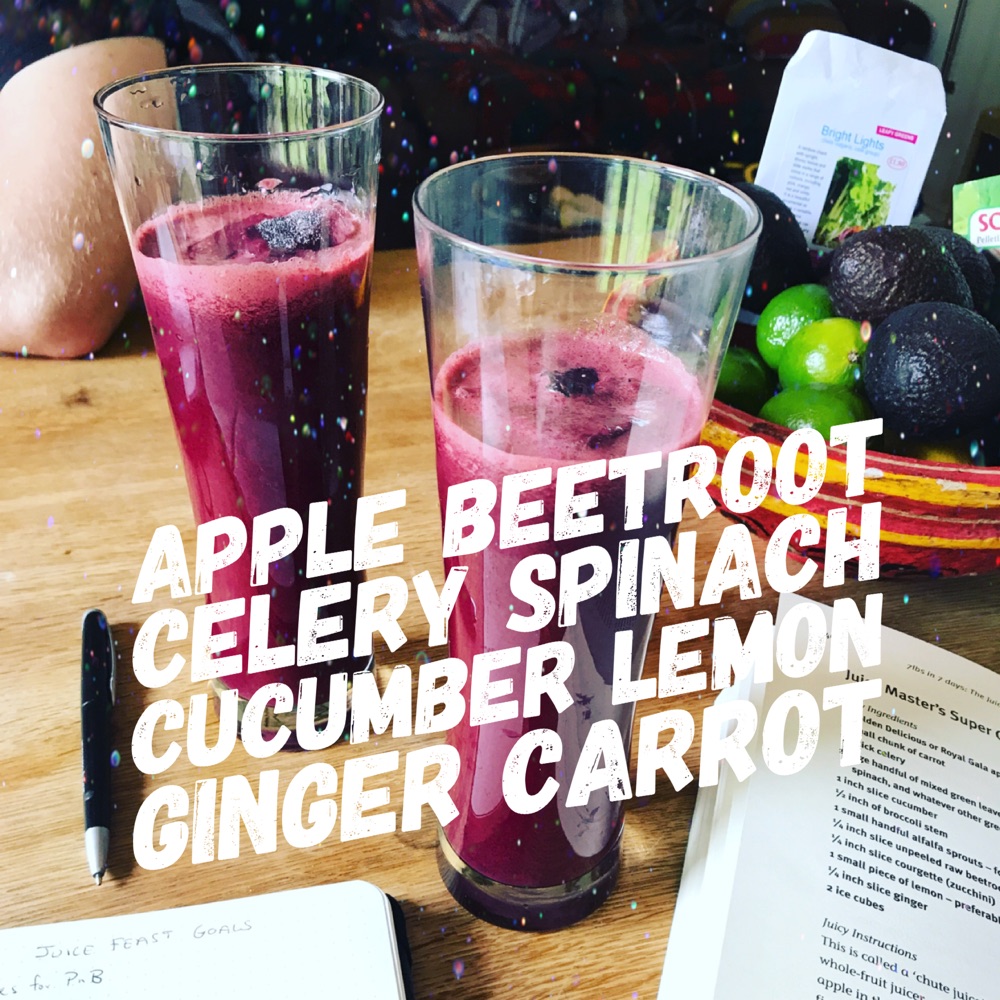 We just finished the 7 days and I wanted to feedback on some of my take-aways. 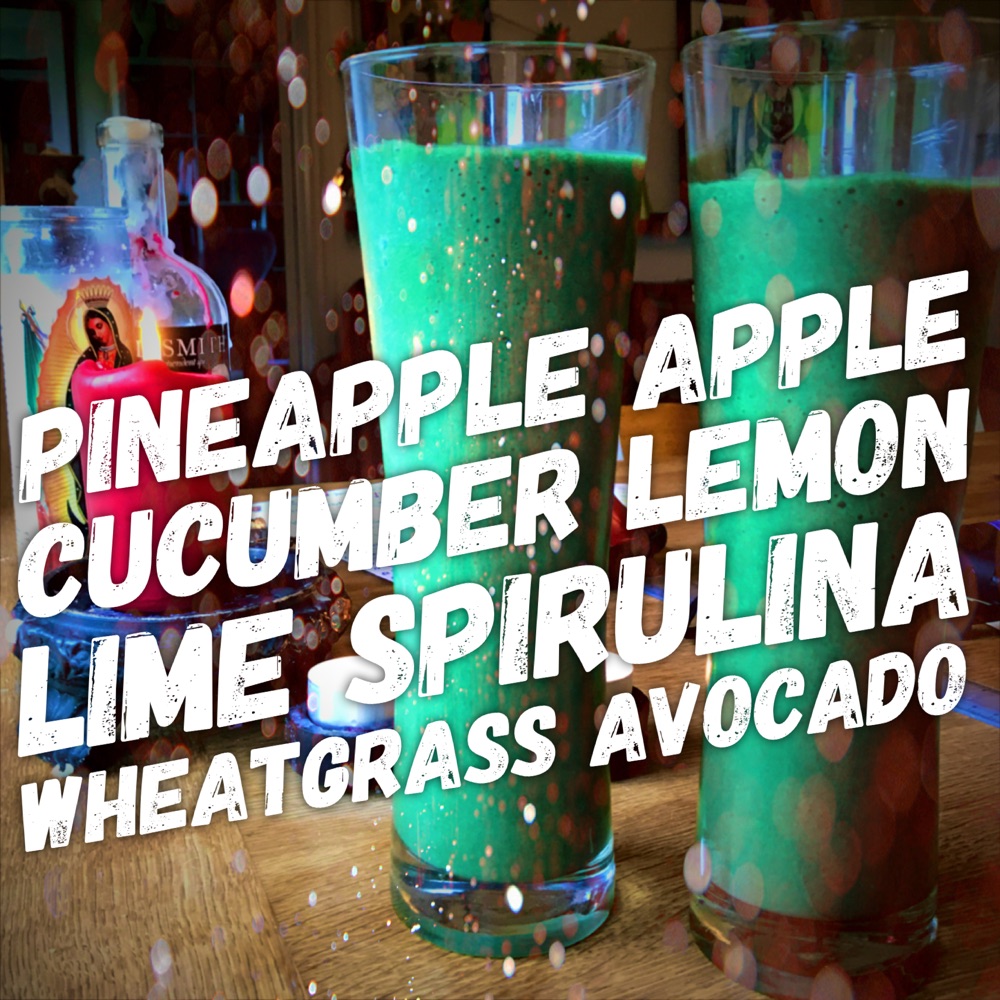 Most of you reading this will have never done something like this before. So here’s a few takeaways from Andrew, a fellow newbie to juice feasting. Trust me, if Andrew can do a juice feast with gusto, anyone can!

When Monica talked in the past about this Juice Feast malarkey, I admit to being very deeply and committedly skeptical about it. I mean, I believe in eating food, not drinking it. Food is for pleasure as well as nutrition. Juicing, so I thought, went against everything I believed in.

But then, a week and a half or so ago, it became clear that there was a need for a mental reset, and when Monica proposed doing another of her Juice Feasts, I jumped at the chance to surprise her and agreed to join in. Solidarity and all that, right? 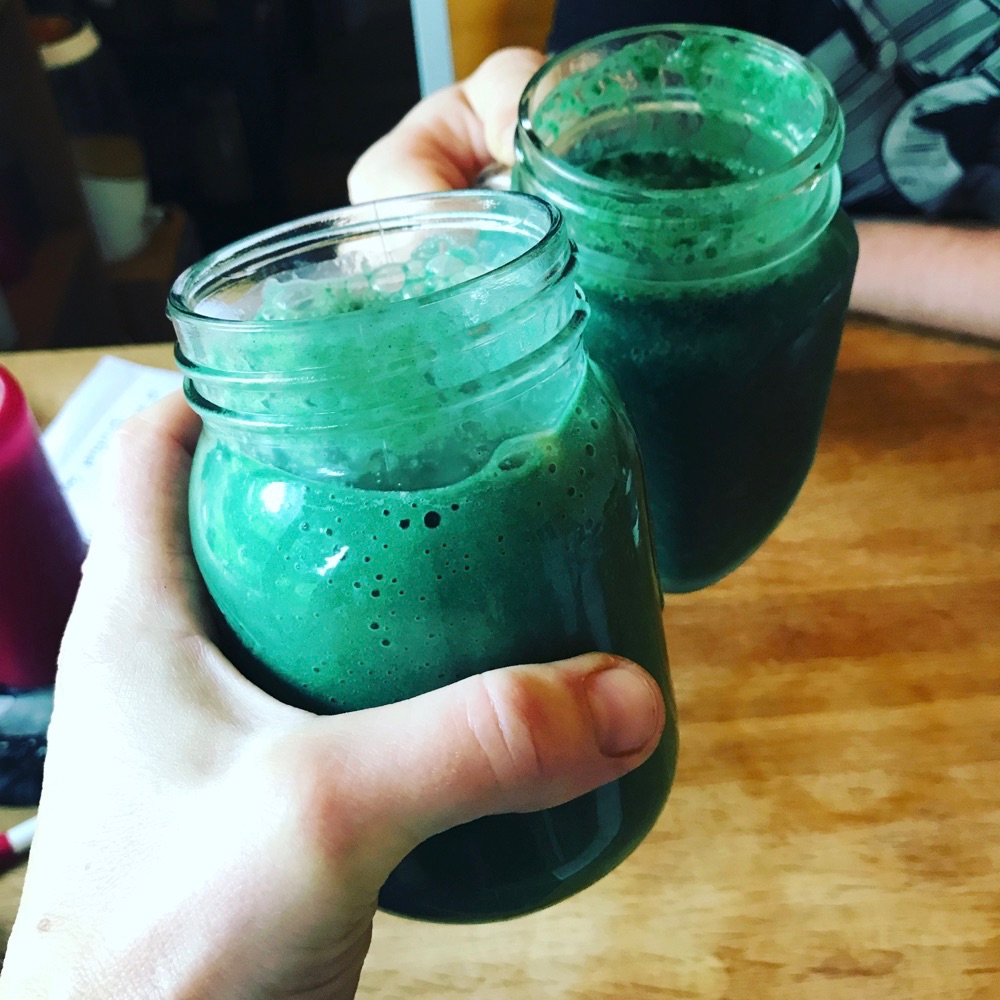 Having just finished, here are my take away points:

It was certainly not easy being hungry all the time. And I’m not totally persuaded about this kind of thing nutritionally. But you know what? Next time either of us needs a reset, I’d definitely do it again. We’ve even talked about doing it every six months. I’m even looking forward to it…

I’m sure many of you are curious. Here are our measurements before and after. Needless to say we were both pretty pleased! 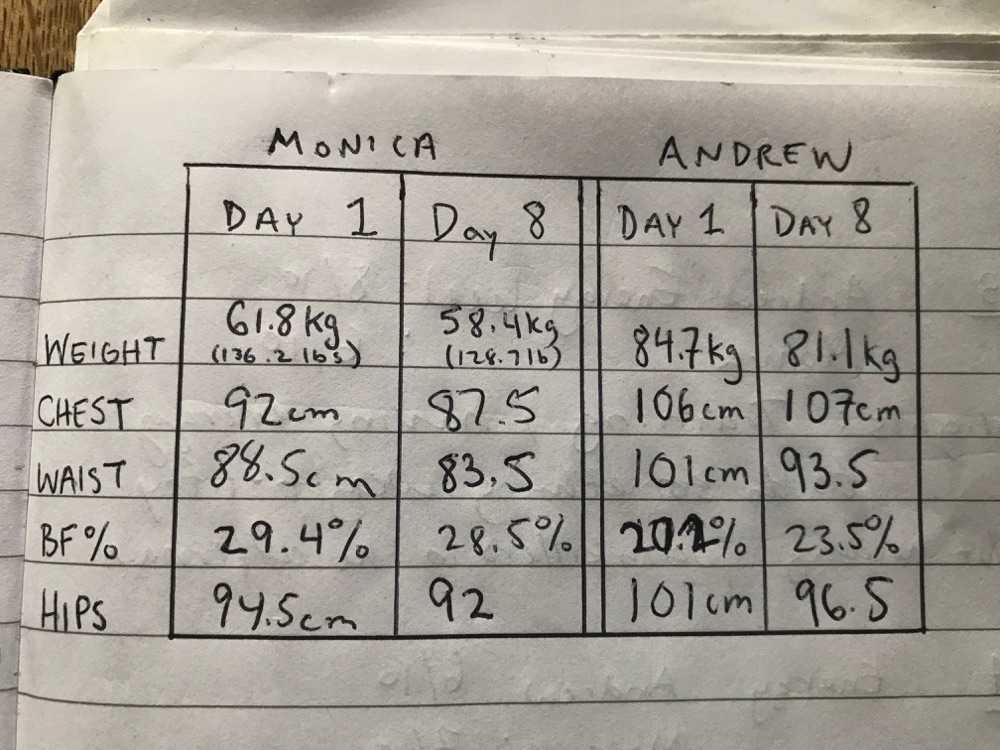 The Tools We Used: